KIGALI, Rwanda - Anthony Newbold, President of The Bahamas Press Club 2014, has been appointed to the Executive Council of the newly formed African Caribbean & Pacific (APC)- Press Clubs Federation at the founding Congress convened in the Ubumwe Grande Hotel, Kigali, Rwanda on October 20 to 21, 2016.
“It was an amazing and priceless experience,” said Mr. Newbold. “The opportunity to network with fellow journalists from the African continent and the Pacific Islands, as well as establish the name of The Bahamas and The Bahamas Press Club in a world class setting cannot be overstated. There is no limit to the potential benefits from this association!”
Addressing the assembly, Mr. Newbold noted the young and robust press corps in The Bahamas and their efforts to continually deliver on their mandate to inform and educate the public by holding the government to account for its actions, publicizing issues that need attention, educating the public and bringing people together.
At that General Assembly, a charter was adopted for the formation of the Federation as an umbrella organization, to build a platform for ACP press clubs, international press centres and press associations to exchange useful information, collaborate on joint projects, share expertise and build an international platform for communication initiatives.
The 12 member Executive Council is comprised of press club heads from six regions: West Africa, Eastern Africa, Southern Africa, Central Africa, the Caribbean and the Pacific Islands and is headed by Mr. Gaspard Safari, President of the Kigali Press Foundation.
The Council will support the work of the General Assembly and monitor the implementation of decisions taken by the General Assembly.
Mr. Newbold is joined on the Executive Council by Ms. Jewel Forde, President of Barbados Association of Journalists.
The Federation is expected to serve as a platform to not only raise awareness of ACP issues, but also to enhance the visibility of the ACP Group of countries.
The first official meeting of the council is expected to take place at the end of February in Kigali, when more concrete plans will be discussed and agreed to be pursued, leading up to the first official General Assembly of the Federation in late 2018.
Recognizing the need to establish a network
of media associations across the member states, the ACP Secretariat signed an MOU with the European Press Clubs Federation in September 2013, chaired at
the time by Belgium (Brussels EU Press Club), to explore the establishment of a federation of ACP Press Clubs.

Efforts under this partnership resulted in the European Commission funding the first regional congress of ACP Press Clubs in Cotonou, Benin in July 2014, attended by the ACP Secretary General and opened by Benin’s Minister of Information and Communication.
Since 2015, the Brussels EU Press Club and the ACP Secretariat have continued to work closely to advance this project. The Brussels EU Press Club is currently in discussions with relevant officials on the anticipated bid by Rwanda to host the General Assembly of the International Association of Press clubs in 2017, which will be the first for the African continent and the ACP as a whole. 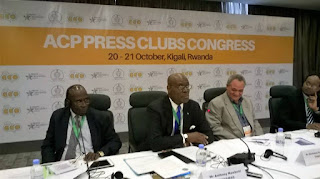 Posted by The Bahamas Press Club at 16:15 No comments: