Prime Minister Dr Hubert Minnis, in his address at the Bahamas Press Club’s awards banquet, came across as rather presumptuous.

Here is a man with less than zero experience in journalism telling experienced journalists how to practice their profession.

It is akin to me, having absolutely no knowledge of medicine, lecturing him, a gynecologist, on how to perform a caesarean section.

When I was given the mic, I was tempted to remind him that talking fool is a very serious thing.
Members of the press ought rightfully to have felt insulted by the Prime Minister’s remarks.

In effect, he told us we were failures at our profession, especially for not supporting his pet projects, like his attempt to have citizenship bestowed outside the provisions of the Constitution.

To regurgitate the prime minister’s insane attempt at rank intimidation is to yuck up my vexation. You could read it in mainstream.

Suffice to say, the prime minister’s remarks only made what I had to say all the more pertinent.
The press is a pillar of strength for democracy in our Bahamas, I said.

At no other time in our Bahamaland, post Independence is the role of the press more crucial.

With such a runaway victory at the polls by the FNM, and human nature being what it is, it falls on the shoulders of the press to hold the government true to the national cause.

We must ensure that that does not become a self-fulfilling prophecy for the FNM.

More than just regurgitating press statements, we must go behind the scenes and investigate from top to bottom without fear or favor, leaving no stone unturned in pursuit of the truth.

We cannot leave such vitally important processes to the much-discredited PLP, which has been fated with the important role of the Official Opposition.

The PLP, in its present state, is so utterly discredited, Bahamians do not have sufficient confidence in them for them to properly be seen to be performing the important role of Her Majesty’s Loyal Opposition.

This could have been a golden opportunity for the DNA to prove its devotion to the national cause.
Alas, the couple of press statements I read coming from the DNA shows it to be merely reactionary.
They have taken the easy path most trodden – government bashing.

And, since a strong Opposition is cornerstone to a transparent and productive government, the press must see to it that advantage is not taken of the naïve Bahamians who so overwhelmingly put their trust in the FNM.

We must ask the hard questions and demand the right answers. Report with neutrality and impartiality. Let the chips fall where they may. Investigate from top to bottom and back. Take nobody’s word for it.

We must be in a position to determine when the government moves from being a solution to the problems facing the nation, to itself being a part of the problem.

And since the press is the watchdog of the nation’s affairs, Bahamians must co-operate with the press. Report to them everything.

And, my colleagues, I urge you: cultivate sobriety, and most of all be vigilant. 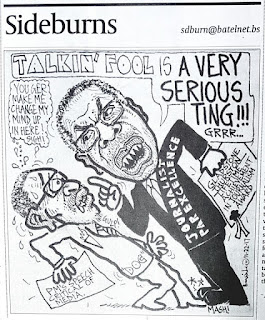 Posted by The Bahamas Press Club at 15:16 No comments:

The Prime Minister seemingly bashed the media and suggested what they should be reporting on, instead of critcizing him and his Government.

“I would say that the Prime Minister was perhaps misguided in the opinions he expressed about the media and the hard-working professional men and women who daily gather the news from every corner of this archipelago,” Mr. Capron said.

But that is exactly why The Bahamas Press Club has instituted the annual media awards, he noted.
“Because you always hear the press being bashed for what it is not doing. The good goes unspoken, unrecognized and unappreciated by the critics.

“And so, we cannot and will not be put off by the bad mouthing that will come our way. We have a job to do and we will do our job.”

Posted by The Bahamas Press Club at 15:07 No comments:


WINNER: Leah Cooper – Student, Media Journalism, University of The Bahamas
Posted by The Bahamas Press Club at 15:10 No comments:

Thank you for the invitation to bring brief remarks at your third annual awards banquet. Let me begin by congratulating this year’s nominees.  I also wish to recognize the Lifetime Achievement Award granted to Gladstone Thurston for his contribution to journalism over many decades.

The press has an essential role in promoting good governance, transparency and accountability. By pressing public officials for accurate and timely information, the press helps citizens to learn about the decisions being made by a government on their behalf.

But in addition to the sometimes-heated moments or events of the day, there is much more that the press may report on, especially on matters of public policy.  There has been a tendency by political journalists to mostly report on the clashes and drama of politics.  Such reporting is fairly easy and exciting.  Still, while there is news in such events, there is considerably more, much more, when reporting on politics and the workings of government.  Some in the press often miss important and more consequential stories on important public policy questions.

By example, the landmark legislation that will be introduced to enable a certain classification of women and men denied equal access to citizenship in the Constitution has been unreported, while some other stories have gained more traction. Drama undeniably excites viewers and readers.  This is much easier to report on.

But certainly the press has a broader obligation to report on policy matters that will have a greater impact than some stories that are less substantial.

A good journalist does not think or write in clichés.  A good journalist appreciates nuance and complexity. Often missing from local reporting is a broader context, which helps readers and viewers to understand an issue or story, with greater historical background and comparison with other countries and jurisdictions.

I recall a conversation in which someone referred to a matter as a Bahamian problem.  They were corrected by someone else in the conversation, who rightly said that the matter at hand was a human problem, with a Bahamian twist.

Good public servants and good journalists have a broader, more global horizon. It is easy for public officials, business people, journalists and others to be insular, to navel-gaze, while avoiding a broader horizon.

Journalism that is not nourished by in-depth reading and by external news sources such as international broadcasts, magazines and newspapers, remains narrow and insular.

The government of the day is committed to creating a new culture when it comes to official corruption.  We are instituting a number of measures to promote cleaner government and to stem corruption.

This would be a good moment for the media and certainly for an enterprising reporter to research and report on the clean government and anti-corruption regimes of other jurisdictions.

Likewise, on other matters of public policy, it would be useful for the media to give their readers and viewers a more global perspective – in both senses of the word, “global” – on issues being debated in The Bahamas.

A good journalist is one who is curious and who continues to learn.  A good journalist appreciates the need for comparative reporting.  Readers and viewers are short-changed when reporters and editors become rote, mundane and predictable in their reporting.

While I understand that journalists in The Bahamas must take on multiple roles given the number of reporters and limited resources; it is still surprising that some who serve as editors also regularly write or offer commentary.  This is not a practice that would be allowed by journalists in other countries.  I am not speaking here of editorial writing.

A journalist and a columnist are distinctly different roles!

Nor the editors of The New York Times or Globe and Mail in Canada, nor the editors at the British Broadcasting Corporation would allow their editors to write commentary or to host a radio program driven by personal opinion as well as commentary that purports to be news analysis.

The 24-hour cable news shows in the United States have in a number of ways led to a lessening of standards that would not have been allowed in previous times. There has been a considerable blurring of reporting and commentary.

It is telling when certain standards have been breached, that some in the press do not even realize that a standard has been breached. Journalists are not supposed to be champions of any political party, business, group or interest in a country.

Journalists must avoid conflicts of interest, and must be allowed to report fairly and honestly on where a story takes them.  The best journalism criticizes, celebrates and inspires.

I note that while some journalist are often more prone to negativity and cynicism, there are many wonderful and positive stories reported by the press, though I sometimes believe there can be more such stories.

The editor in chief of the UK Guardian news and media group Katharine Viner recently noted:

“If people long to create a better world, then we must use our platform to nurture imagination – hopeful ideas, fresh alternatives, belief that the way things are isn’t the way things need to be.

“We cannot merely criticize the status quo; we must also explore the new ideas that might displace it.  We must build hope.”

I believe that it is the great task and wonderful responsibility of all of us in the public domain, including political leaders and journalist, to “build hope” and not merely to “criticize the status quo.”  May we use our platforms in journalism and government to “nurture imagination.”

Let me close by thanking all of you for your work as journalists.

I especially thank the reporters and editors who work hard to inform and educate viewers and readers.

Your role in our democracy is essential.  This is why I thought it important to appoint a press secretary.  I note that Anthony Newbold is a past president of the press club.

I wish the Press Club every success as you continue to develop as an association of journalists committed to the values, ethics and principles of your craft.


Thank you all and good evening.

Posted by The Bahamas Press Club at 15:02 No comments: 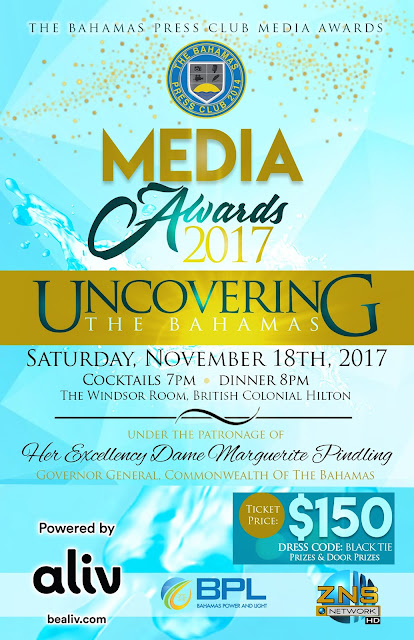 Posted by The Bahamas Press Club at 00:29 No comments: 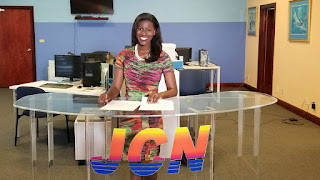 Bahamian Journalist Meets with Members of Congress of Parliamentarians